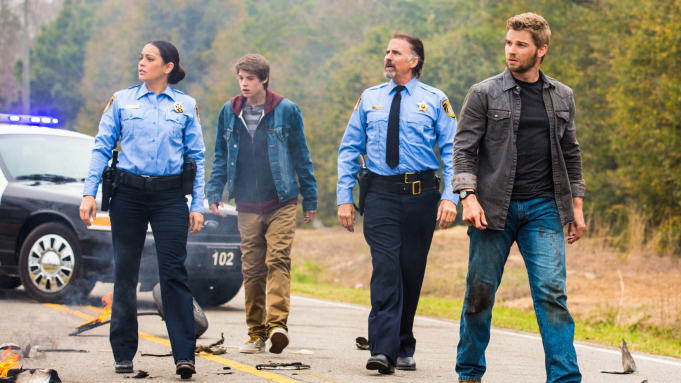 To any individual who has obtained a lifetime of experience already a couple of times with Stephen King miniseries, “Under the Dome” — which CBS is wisely booking as a mid year hurl — has every one of the recognizable features and starting guarantee. A little local area of unique characters is confronted with an exceptional circumstance and weird secret, leaving watchers to ponder a bigger question while ideally getting brought into singular stories. On the off chance that it resembles most King transformations, the result only here and there rises to the development, yet in the initial salvo, King’s most recent “Strange place”- like reason obviously can possibly get under one’s skin.

The characters of Chester’s Mill are hectically approaching their lives — and on account of a guest nicknamed Barbie (Mike Vogel), covering a body — when a goliath imperceptible arch abruptly shows up around the town, parting a terrible cow in twain and making an invulnerable hindrance, as unfortunate little plane pilots and drivers rapidly find.

Who or what’s mindful? No one knows, with early fingers pointed at everything from extraterrestrials to the public authority, with Barbie excusing the last chance by saying basically, “It works.” (Too awful this isn’t a political decision year, since that would have set out wonderful sponsorship open doors for the Tea Party.)

Created by Neal Baer and Brian K. Vaughan (who adjusted King’s book), “Arch” has gathered a strong cast, including Rachelle Lefevre as the neighborhood paper manager investigating what’s occurred, Dean Norris (“Breaking Bad”) as the vehicle seller/town senior, Britt Robertson as a youthful inhabitant, and Natalie Martinez as an agent sheriff. (Both Lefevre and Robertson are veterans, it just so happens, of another too-fleeting CBS summer tryout, “Swingtown.”)

Ruler’s material delighted in a marvelously business stretch on ABC — with boffo evaluations for multipart creations like “It,” “The Stand,” “Tempest of the Century” and “The Shining” — before the creator’s work started to yield unavoidable losses. Indeed, even before that, however, the story come-ons and sub-par endings began to feel a triviality needful.

In the current climate, CBS and the reduced pressing factor of a late spring run — combined with request from worldwide purchasers — give a more sensible home to this Steven Spielberg-sponsored work out.

All things considered, there’s as yet the little matter of shuffling these different characters, propelling the secret and at last settling why Chester’s Mill was picked to be sequestered from the rest of the world, in a way that will not leave watchers feeling like they ran into their own adaptation of an imperceptible block facade.

While that is certainly feasible, history shows the activity is pretty much as fragile as adjusting a telephone directory estimated King book on top of a pin. CBS hasn’t precluded future seasons, albeit the undertaking would most likely be seriously intriguing on the off chance that it guaranteed one thing the Dome lacks,namely, a plainly stamped exit.

In any case, if the show ultimately turns into another of King’s made-for-TV setbacks, basically we can think back and rework Bart Simpson — who, as will be recognized inside the series, encountered his own disagreement with a larger than average vault in “The Simpsons Movie” — and say, “Don’t split a cow, fella.”