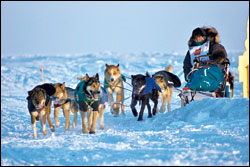 The Frozen North Gov. Sarah Palin shows up momentarily at the start of “Iditarod,” maker Thom Beers’ most recent paean to masculine pursuits in denying climes, continuing in the sled tracks of “Deadliest Catch” and “Ice Road Truckers.” Yet while seeing Palin endure a meeting sound is something of a rush (“It makes Alaska famous globally!”), it’s the canapé to this six-episode series, which gives an intriguing introduction on the race and its tiresome points of interest — in spite of the fact that trudging through the frozen tundra for an additional five weeks is anything but an especially glimmering prospect.Admittedly, the show is instructive. While the Iditarod has a specific heartfelt quality, its Marathon-like history is intriguing — sent off in 1973 to celebrate a chivalrous procession of canine groups that carried life-saving medication to scourge stricken Nome almost 50 years sooner.

Today, it’s more similar to NASCAR of the North, setting 96 mushers in opposition to one another in what’s depicted as “a 1,100-mile gantlet,” every one equipped with 16-canine groups that, tolerantly, are analyzed by veterinarians at designated spots en route.

The human champ acquires an excellent prize of $69,000 and a pickup truck. What the canines receive in return isn’t explained.

Where the show starts to separate, unfortunately, is in the included mushers, who might be dealt with like demigods locally however are definitely not a particularly intriguing bundle to those of us in the lower 48. Of course, each accompanies a very close wind — the local Eskimo who assembled his own sled; the 55-year-old malignant growth survivor taking her last wound at magnificence; the diabetic taking a chance with his life to partake — yet nearly regardless, the characters aren’t close to as brilliant as the origin stories.

Lagers has by and by cut out a convincing specialty in the undeniably old unscripted television scene, zeroing in on troublemaker occupations and side interests in unfriendly or outlandish districts. He likewise moves toward them in a refreshingly direct way, depending on the settings and stakes to yield show without turning to exaggerated struggle or clearly arranged experiences.

“Iditarod” additionally offers what adds up to rather convenient understanding into Alaska’s outskirts soul, to the degree the unmistakable symbolism clarifies what kind of pioneers the state produces. Stringently as a TV fascination, however, the series would likely play better reduced a few hours on ESPN, instead of intercutting among eight groups to extend things for a long time.

Now, following one endless mission including Alaska feels like all that anyone could need.