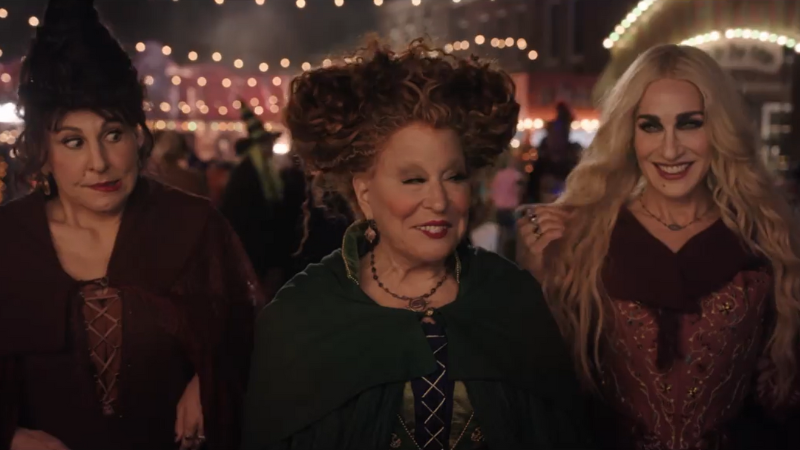 Just about thirty years after their most memorable experience, the Sanderson sisters from Salem, Massachusetts of Hocus Pocus are back for one more experience in the continuation of their 1993 Halloween exemplary.

The new trailer opens up to two teenagers investigating one’s sixteenth birthday celebration and as a custom they light a dark candle to celebrate. What they can be sure of is that it brings the Sanderson sisters — Winifred (Bette Midler), Sarah (Sarah Jessica Parker) and Mary (Kathy Najimy) — back to life.The first film debuted in 1993 and recounted the account of the three evil sisters from Salem who burned through 300 years snoozing before the Black Flame Candle was lit and arose them on All Hallow’s Eve. The subsequent film has a similar reason, as per the trailer, yet individuals are as of now in the soul of Halloween. In the trailer, the Sandersons are seen strolling into a close by occasion and are inquired as to whether they might want to make that big appearance.

In the first film, the witches went head to head against youthful Max Dennison (Omri Katz) and his sister Dani (Thora Birch) who need to prevent the witches from becoming everlasting before the sun rises. Kenny Ortega had coordinated the initial segment a long time back while the impending film is being helmed by Anne Fletcher who is known for her movies The Proposal, Hot Pursuit, 27 Dresses, Step Up and Dumplin’.

The cast of the spin-off incorporates Ted Lasso star Hannah Waddingham, Tony Hale, Sam Richardson, Doug Jones, Whitney Peak and Drag Race sovereigns Ginger Minj, Kahmora Hall and Kornbread “The Snack” Jeté.Sure enough, the city chairman’s child Sahin (Erol Babaoglu) and his smiling, docile companion Kemal (Erdem Şenocak) show up very quickly at Emre’s office, apparently to invite him, yet truly to sound him out. Their guy ish facetiousness fails to be noticed: Emre everything except dribbles urbane contempt for these nearby hicks with their storage space discuss whorehouses and pig hunting ventures. In any case, in spite of the mysterious advance notice gave by Murat (Ekin Koç), the attractive supervisor of the resistance paper, Emre goes to that critical supper with the city chairman. He awakens the following day with a power outage raki headache and dimly fragmented recollections of the night, which finished in the fierce assault of Peknez (Eylul Ersoz), the sluggish witted Roma young lady who had made an appearance to move for the men late on.

What makes “Consuming Days” such an abnormally fascinating wrongdoing thrill ride from here on is the manner in which it works on equal tracks, with Emre at the same time needing to bring the rapist(s) to equity, while additionally stifling any arising proof of his own possible contribution in the wrongdoing. Paşali’s smolderingly irresolute exhibition is vital to making Emre’s disturbance so particularly convincing as he reverts from the crusading, if firmly impertinent, outcast of a class western into the by and by compromised wannabe of a film noir. That this is all set against his very own background scarcely recognized homosexuality, in a town where even the gossip of same-sex fascination is sufficient to present outsider status, just adds further degrees of individual and expert disarray to the exciting brew.