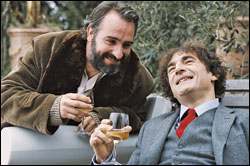 Malignant growth and parody are shaken, then, at that point, mixed to frame a far-fetched mixed drink in “The Clink of Ice,” cineaste Bertrand Blier’s (“Buffet froid”) dim parody of one man’s uncanny relationship with his own terminal disease. More dramatic chamber piece than realistic purposeful anecdote, this manor set undertaking sways between episodes of cleverness and the top dog’s brand name skepticism. Albeit both the situation and its execution are generally expected graceless, stars Jean Dujardin and Albert Dupontel make a considerable team that is for the most part a joy to watch. Wide-scale French rollout ought to metastasize into great abroad business following the pic’s global bow in Venice.

Withdrawn writer Charles Faulque (Dujardin) can live without composing, yet he can’t survive without a container of white wine and a can of ice, which mark his days on a separated country home in Southern France. As Charles best accounts for himself, “I turned into an author, then, at that point, a drunkard, however I don’t know in what request,” which is the reason his better half (Audrey Dana) and child (Emile Berling) hammered the entryway quite a while back, passing on him to mix in his own inebriating juices alongside his unwavering, sex-starved worker, Louisa (Anne Alvaro, strong).

In case life is unmistakably a bummer for Charles — and this in spite of the presence of his most recent g.f. (Christa Theret), a sprite like Russian magnificence who invests her energy either swimming or topless — it’s going to deteriorate with the appearance of his malignant growth (Albert Dupontel), who seems one day in human structure (however at first simply noticeable to Charles) to caution him that time is expiring.

Portraying malignant growth by means of a scheming, loudmouthed annoyance/fanciful companion (an awful and mocking “Harvey”- like sign) is most certainly a unique one, and Blier milks it all through the pic’s initial scenes as we see Charles’ apprehensions changed into loads of infantile antics. The artist play these early minutes for all their value, Dujardin acting engagingly abnormal as the grating and detestable creator, Dupontel contributing his standard lively horseplay as an infection wearing a tuxedo.

However while the idea is alluring and the cast consistently watchable, the activity, which is fundamentally controlled to a solitary setting, becomes tedious under Blier’s spent taking care of: what number occasions can the two knuckleheads shout at each other before the jokes begin feeling old?

As the story advances and Louisa begins to assume a urgent part (her own malignant growth showing up as an irritating moderately aged vixen, played by Myriam Boyer), Charles lands on a way toward recovery. While it may not show him any important examples nor shut down his drinking, the story’s astounding conclusion demonstrates that Blier has lost none of the vile perspectives communicated in 1974’s “Les Valseuses,” which, similar to this film, demonstrates that interminable intemperance isn’t constantly rebuffed.

Regardless of the claustrophobic stylistic layout, customary cinematographer Francois Catonne uses a lot of Steadicam and a variety of monochrome channels to make things liquid and beautiful. The soundtrack is a welcome blend of contempo works by authors Pascal Dusapin and Eddy Louiss, just as oldies like Felix Leclerc’s “Ailleurs,” which goes with the activity at its most wonderful second.