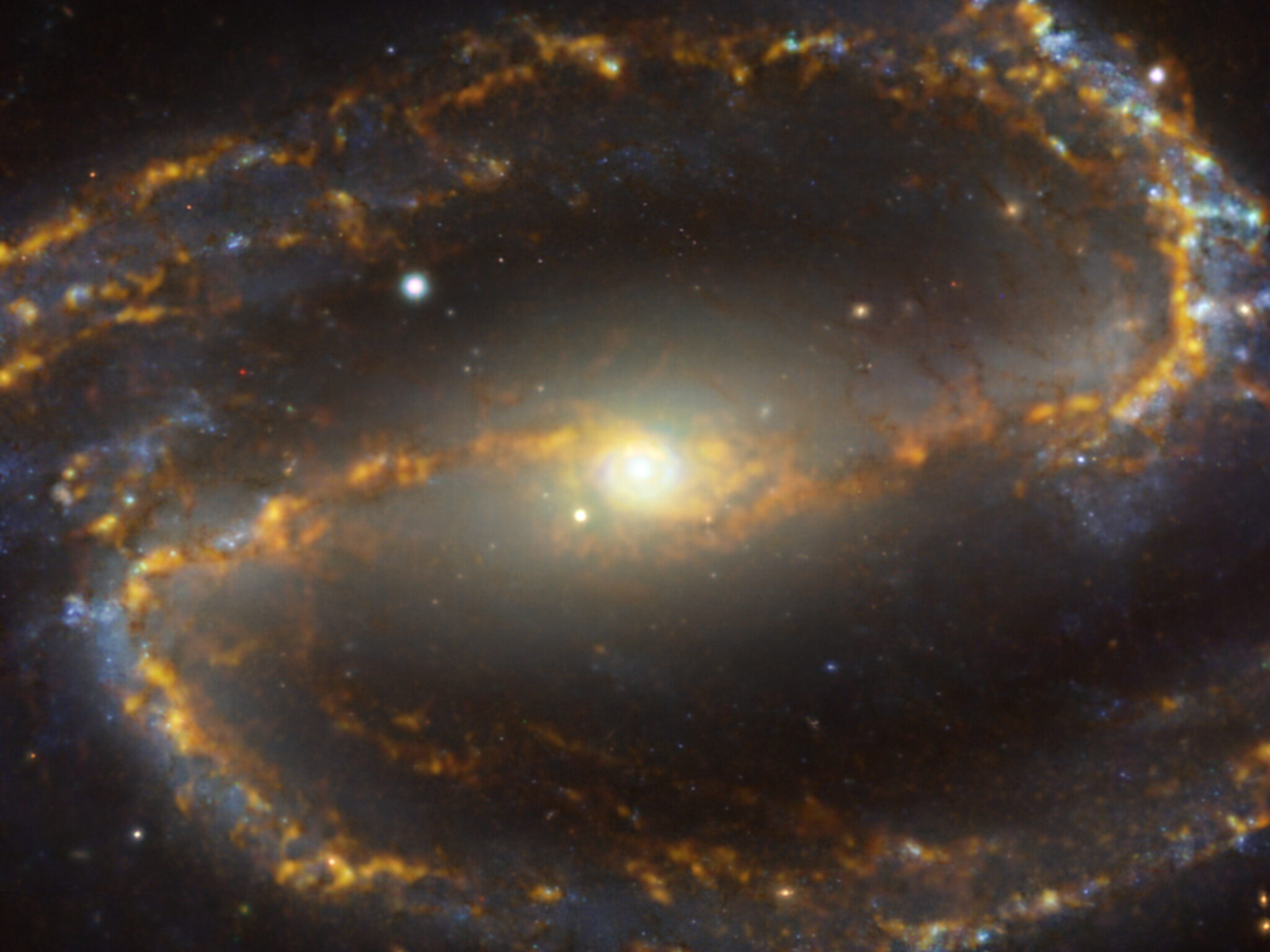 The European Southern Observatory’s image of this current week resembles a delectable caramel home. The picture is of the NGC 1300 winding cosmic system, situated around 61 million light-years from Earth. It was made utilizing information gathered by the Atacama Large Millimeter/submillimeter Array (ALMA) and the Very Large Telescope (VLT) situated in Chile.

The picture shows a bar of stars and gas alongside a focal ring which shows an exceptional star formation.”The picture is a mix of perceptions directed at various shadings – or frequencies – of light. The brilliant caramel gleam relates to billows of atomic gas, the natural substance out of which stars structure,” said ESO in a release.The pictures were taken as a piece of the Physics at High Angular goal in Nearby GalaxieS (PHANGS) project. The venture plans to mention high-goal objective facts of neighboring cosmic systems utilizing a few telescopes, including the ALMA, VLT, Hubble and the recently sent off James Webb Space Telescope.The various telescopes will assist with noticing the close by universes at various frequencies. “Various frequencies can uncover a huge number of privileged insights about a world and by contrasting them cosmologists are capable with concentrate on what initiates, lifts, or obstructs the introduction of new stars,” adds the release.The inconvenience for Pluto began blending during the 1990s as we began finding more bodies with circles covering that of Pluto’s. Was simply the Asteroid belt story rehashing? Is it true or not that there was one more belt of minor bodies past Neptune (as anticipated by Kuiper)?

In 2003, American space expert Mike Brown and his associates found a body (presently known as Eris), which was positively greater than Pluto and we could never again dodge a few questionsHow numerous planets are actually out there?
*Would it be a good idea for us to say nine, including Pluto?
*However at that point what might be said about Eris? Would it be a good idea for us to say 10?
*In any case, who is to ensure that there could be no number 11 or 12, or considerably number 20 inside a similar belt?
*Would it be advisable for us to depose Pluto as Ceres was ousted 150 years back and return to eight planets?
*Should this be a subjective/made to order choice or might there be a true method for characterizing a planet?

IAU delegated a board of trustees of space experts, headed by American astrophysicist and student of history of science Owen Gingerich, to track down replies to these inquiries. This panel presented its suggestions to the overall gathering in Prague that I referenced before.

According to their suggestions, any body “circumventing any star, circular in shape and not itself a star” ought to be known as a planet. This would have kept Pluto as a planet, redesigned Ceres back to the planet status and added Eris and Charon to the rundown of planets.About 70% of the cosmologists going to the overall gathering firmly couldn’t help contradicting practically each piece of this definition.

Some called attention to that there are probably going to be planetary estimated round bodies sneaking in the world which are not circling any star. Some contended that we don’t comprehend the physical science of planetary sizes alright, while some contended that this definition implied that the rundown of planets in the nearby planet group would continue expanding every year, in the long run in any event, crossing 100.

Some even affirmed that the panel had pre-concluded that the main ‘planet’ found by an American (for example Pluto) should stay a planet and just thought about definitions which fulfilled that order.