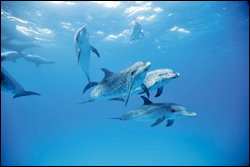 An honor winning narrative with establishment potential? That is the arrogance behind Animal Planet’s three-section miniseries “Blood Dolphins,” which proceeds with the account of the current year’s Oscar doc champ, “The Cove,” by following the further undertakings of dolphin lobbyist Ric O’Barry. A simple sell for the nature net’s interest group, the task additionally has an inherent interest factor for those enthralled by its widely praised archetype.

Miniseries’ first hour rapidly recaps the significant places of “The Cove,” including O’Barry’s progress from previous mentor for TV’s “Flipper” to energetic enemy of bondage lobbyist, using a portion of the film’s vital film of awful dolphin butchers in Taiji, Japan. A piece of the doc’s main goal was to uncover these practices, explicitly in Japan, where the media had for the most part deliberately ignored.

O’Barry’s re-visitation of Taiji for “Blood Dolphins” proposes that, essentially as far as bringing issues to light, the film was a triumph. Despite the fact that “The Cove” had not yet been generally found in Japan, its standing obviously went before it. O’Barry’s most recent visit was archived by multitudes of columnists and news sources, a glaring difference to the incognito tasks caught in the doc.

The more extreme spotlight appears to help the dolphins — O’Barry and his group, including child and individual dissident Lincoln, interestingly witness dolphins being let out of the alleged “blood bay.” But any expectation that things have improved totally demonstrates brief.

The connections between “Blood Dolphins” and “The Cove” give a conspicuous chance to assess the contrasts between a first rate dramatic doc and the demonstration break-driven construction of satellite TV. “Blood Dolphins,” with its clear and inescapable melodic score and in an exposed fashion emotional demonstration breaks (will O’Barry get captured by Japanese police in the debut’s initial 15 minutes?), falls off more uncouth by correlation.

The film’s harmony between cunning infotainment and heartbeat stimulating covertness missions gives way to the smallscreen’s accentuation on working however much energy as could reasonably be expected to keep watchers from channel surfing. Consider the trade offs important wrongs of an unscripted television world.

“Blood Dolphins” gets an uncommon review two days in front of Animal Planet’s digital TV debut of “The Cove.” Miniseries’ second and third hours will not air until after Labor Day in its customary 9 p.m. timeslot. Those ensuing portions will follow the O’Barrys as they leave Japan for the Solomon Islands, a problem area of dolphin managing, where this surprisingly continuous narrative adventure proceeds.